After you try out the FREE samples – you can purchase a complete Volume or a complete set – in one of three ways – (see all purchasing options) :

To View our online Manual and Knowledge base which describes all the features of the app and answers common questions please visit http://kb.artscroll.com

Click here for more information about the ArtScroll App and Available Digital Volumes. 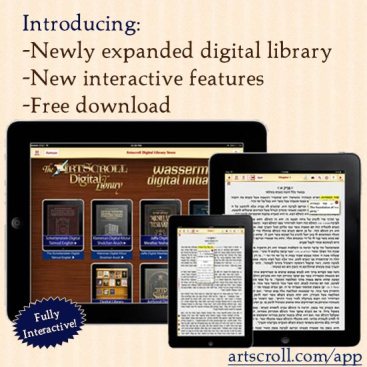 In the two years since its release, over fifty thousand users have discovered the ArtScroll App and the Wasserman Digital Initiative. With interactive features and the ability to carry multiple Talmud volumes in the palm of their hands, the Schottenstein Digital Edition Talmud Bavli has transformed the way people learn Talmud on the go.

And now, after years of development, we’re happy to announce that the Wasserman Digital Initiative is expanding. No longer is the ArtScroll Digital Library focused on the Talmud alone. With two new digital editions now available, and multiple new projects on the way, the ArtScroll App is opening the doors of learning and Torah study for hosts of new users.

Carry all five volumes of the renowned Kleinman Edition Kitzur Shulchan Aruch in the palm of your hand, while having access to the groundbreaking and interactive features of the ArtScroll digital library – at less than half the cost of the print edition.

The Jaffa Digital Edition Mesillas Yesharim/Way of the Upright for iOS and Android devices:

Combine the classic phrase-by-phrase translation and explanatory notes that the Jaffa Edition Mesillas Yesharim is known for with the state-of-the art innovative digital features of the ArtScroll app, for less than half the price of the print version.

It doesn’t end here! Our team of programmers and scholars continues to collaborate on these upcoming projects:

Wasserman Digital Edition Siddur: a “super” smart siddur, coming to the ArtScroll Digital Library at the end of 2014 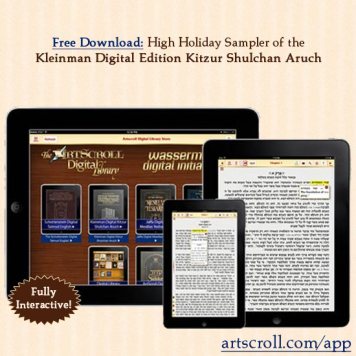 To celebrate our newly expanded digital library, we are offering a free sample portion of the Kleinman Edition Digital Kitzur Shulchan Aruch, dealing with the laws of the High Holidays and Succos.

If viewing this on your mobile device with the app installed, simply click HERE to open the free download in your app.

Click here to learn more about the newly expanded library and all of the exciting and innovative new features.

If you’ve never experienced the innovative digital library from ArtScroll, here’s your chance! 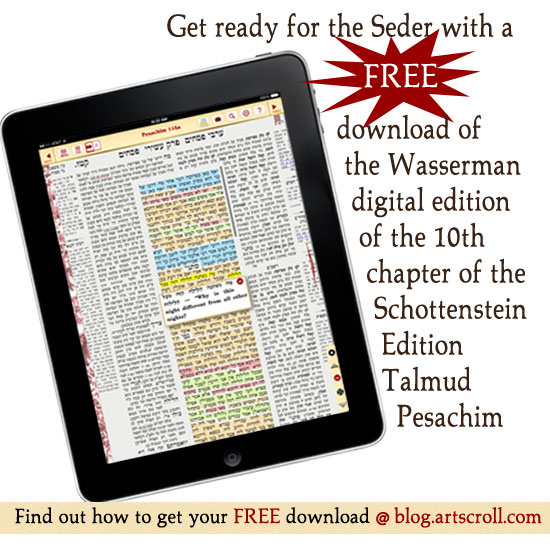 ArtScroll’s app for Apple, Android and now Kindle, is the revolutionary way to learn in today’s world. Putting the clarity of the Schottenstein Gemarah at your fingertips, the ArtScroll app adds convenience, plus all kinds of innovative features such as search functions, color coding and highlighting capabilities, and note functions. You can also tap on a reference, and the source commentary will instantly pop up.

Want to try it for yourself? Here’s your chance. ArtScroll is offering a free volume. The 10th chapter of pesachim talks about the Seder, the Four Cups, the Ma Nishtana and recounting the story.  It is an excellent selection to prepare for the seder.

1) Click this link from your mobile device and it will take you to the correct volume on the ArtScroll App. Press “download.”

2)  Click this link to visit to the volume’s product page on ArtScroll.Com. Click on this icon (pictured at the right) and it will take you to the correct volume in the ArtScroll App. Click “download” to save it to your library.

3) Open the ArtScroll app, then open the in-app store. Click on the “individual volume” section and scroll down until you see the option for Pesachim 3 FREE Sample and click download.

To learn more about the Wasserman Digital Initiative App, click here to read more or watch the video.

Welcome to the ALL NEW ArtScroll Blog!

Thanks for visiting the Official Artscroll Blog.

Follow us for exclusive articles and interviews with our authors. We'll also be posting news about new books, sales and promotions, plus contests and giveaways!

Thanks for visiting, and come back soon!